I had some interesting meetings last week with advocates in the Northwest. The leader of a CHADD-affiliated support group in Portland, Oregon has an interesting history. Glenn was one of a minority in his unit in Viet Nam who survived brutal combat. After a year in the infantry, he became a medic, initially on the ground and later on a helicopter. Medics on the ground were easy targets, as they had to move around under fire to try and rescue their wounded comrades. I could tell right away that Glenn has a big heart and can identify with the emotional pain of his ADHD peers. His support group is mostly a discussion group (vs. a speaker group) where participants share their personal challenges with ADHD and support one another.

On another day, in another city, I met with Dr. Thom Field, a native of the UK and a neuropsychologist in Seattle. Dr. Field’s important research and writing are mostly about the use of neuroscience in mindfulness-based cognitive therapy. He has a personal meditation practice. He was interested in how our support group works, and I was glad to describe what we have created together in Nashville. As we said goodbye, Dr. Field acknowledged being in the ADHD family. He asked permission to quote me in his new book.

On Friday, I met with a physician in Seattle who specializes in treating adults with ADHD. Dr. Angela Heithaus has ADHD and has two sons with the disorder. She has a large collection of ADHD books and told me that she came to the practice of treating adults with ADHD by way of primary care. She works with a few therapists in her suite. Dr. Heithaus clearly is dedicated to enhancing the lives of adults wired like us. I was a bit envious of her office, the east window of which is all glass and overlooks the Puget Sound.

A few of my books have been sold in Canada. And an Amazon help desk operator in the Philippines asked me one night if my book is available on Kindle. She wants to read it. She helped me cancel the accidental purchase of my own book. I swear I have no idea how that happened. After buying three books on mindfulness, I reviewed my purchases and somehow had bought my own book! Perhaps I should write a review of it, or even better, I should write an article and title it “Mindless in Seattle!” : ) 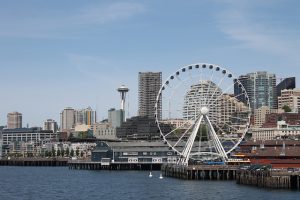