I recall arriving after midnight in Pacific Grove, California almost 40 years ago, and standing alone beside the Monterey Bay. There was no one else in sight at Lover’s Point Park, and I suspect I was not supposed to be there that time of night…seems I recall seeing a sign. I stood so still and quiet that I could hear my breathing while I absorbed the beauty of a full moon creating a path of white light across the dark water. Then I heard a cracking sound echoing in the still of the night. I was curious. I moved around to line up the path of moonlight and illuminate whatever was making the sound. I spotted an otter lying on its back in the water, cracking shellfish on a stone that was on its chest. It was a Steinbeck moment. 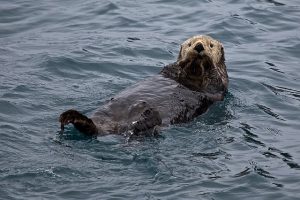 What if your mind was like a calm bay after midnight, an ocean with no perceptible waves? An ocean has waves, but an ocean is not a wave and is not defined by its waves. It is far more than a container of waves. It contains life…it is life.

We are all capable of getting stuck in the waves of our small mind, but our minds can also be vast as the ocean, and we can return to the vastness of big mind as many times and as often as needed. We cannot keep the mind constantly quiet, but we can always return to silence. Exercising our capacity to return to our quiet mind is a reminder that waves of emotion normally recede after they rise, and they recede with less effort, not more. Even large waves subside.

The mind can be calm and quiet, like the Monterey Bay was that night, reflecting a steady light, and illuminating something beautiful in one precious moment. With a routine practice of mindfulness, you can cultivate a mind like the ocean.