Paradoxes of the Time-Challenged

After wasting time in the morning, you decide you don’t want to waste time. So, you put on your seatbelt while you are turning onto the street from your driveway, tie your shoes or put on makeup when stopped at a traffic light, and return a phone call while driving. You apologize and explain why you were late.  You would have been on time except for unanticipated red lights and the bus in front of you. You are always five minutes late…never early or on time, and not even ten minutes late…always five minutes late.

You often say, “There is plenty of time; I’ll do it later.” But when it didn’t get done, you say, “I didn’t have time.” You insist that your family is a priority, but after working inefficiently all day, you choose to work late and rationalize your choice: your work puts food on the table and pays the mortgage, and everyone should understand. 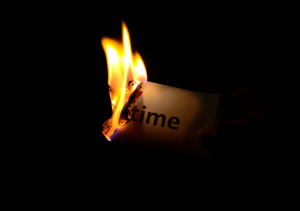 You know the importance of sleep in managing ADHD, but being awake and doing something is more stimulating than going to bed and do nothing. When your ADHD is worse because you didn’t get enough sleep, you say you need to get more sleep. But your idea of “bedtime” doesn’t change from being the moment you realize that you can no longer stay awake. You take medication to be more alert and focused during the day, and you take sleep medication at night because it is easier and faster than developing and sustaining new routines.

You know it would help to have a daily meditation practice, but instead of practicing, you criticize yourself for not practicing. There is nothing worth watching on television, but you keep surfing for something worth watching. You want your spouse to accept you as you are, thereby joining you in denying the effects of the ADHD on your marriage.

You get mentally and physically exhausted because you don’t exercise and don’t eat mindfully…because you don’t have time. Time is what other people have. You don’t know that you are creative because there is no evidence that you are. You don’t protect time for creating and don’t consider that you could learn a craft. You foget such things as classes and teachers (of course, there’s no time for a class).

You blame external events for your internal state: other people and situations are responsible for how you feel and how you respond. But you don’t like being blamed. Others have to interrupt you because you lose awareness of the listener when speaking. Although you dislike being interrupted, you interrupt others because it is hard to listen while holding in your fragile memory what you want to say.

Instead of making New Years resolutions this season, which may be good for just a few weeks, here is an alternative. Contemplate what you value, and make a list of your intentions as they represent your values. Then commit to practicing returning the wheels to the tracks when you get derailed. You can always begin again, as often and as many times as necessary.

Being responsible means not blaming situations or other people (or yourself), which is like blaming life instead of living it. Take the leap of faith that living well with ADHD is possible.

2 Responses to Paradoxes of the Time-Challenged